At GRM we are tremendously proud of the S5000 program.

Like many things our involvement began following a discussion after a beer!

Barry and I were sitting down on the Sunday night after the Newcastle Supercar event last November (2018) discussing our plans for the 2019 season. Much of this discussion centred around our loyal and talented workforce. With the introduction of the ZB Holden in 2018 we found that we were limited with the parts that we were able to produce and were battling to find enough work for our people. We discussed all sorts of alternatives and having just seen Garth Tander roaring around the streets of Newcastle in the S5000 I thought here is something that we could do.

With that thought I sent Brian Boyd (PAYCE) a message asking if Barry and I could catch up with him in his Sydney offices the following day. This meeting happened and I committed GRM to build 14 S5000 race cars.

The initial dream of Chris Lambden that had been turned into a one-off prototype vehicle through the expertise of Mike Borland and funding from Brian Boyd was always going to stay as such unless someone with the resources took it on. On the 26th of November 2018 we did this, and the initial dream is now a reality!

As my motivation to take on this program was to keep my workforce employed, I was as determined to utilise Australian expertise, componentry and manufacturing and to make the S5000 as Australian as possible. The two base components that had to be sourced from overseas were the chassis which is a French-designed Onroak-Ligier carbon-fibre chassis that has been designed with strength, safety and economical cost as priorities and the US based V8 engine that Roger Higgins and his INNOV8 team here in Australia designed and manufactured amongst other things a bespoke inlet manifold and dry sump system. Other major components such as the transaxle which was designed and manufactured by Holinger, MOTEC the electronics, wheels designed and manufactured by Max Dumesney and at GRM we have finalised all of the required engineering drawings and manufactured the cooling system, many composite components of the bodywork, complete exhaust system, wishbones and other fabricated components that make up this race car. We have also undertaken required testing and development that has been necessary to validate componentry and are assembling each of these race cars. 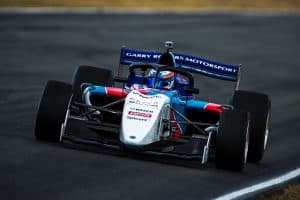