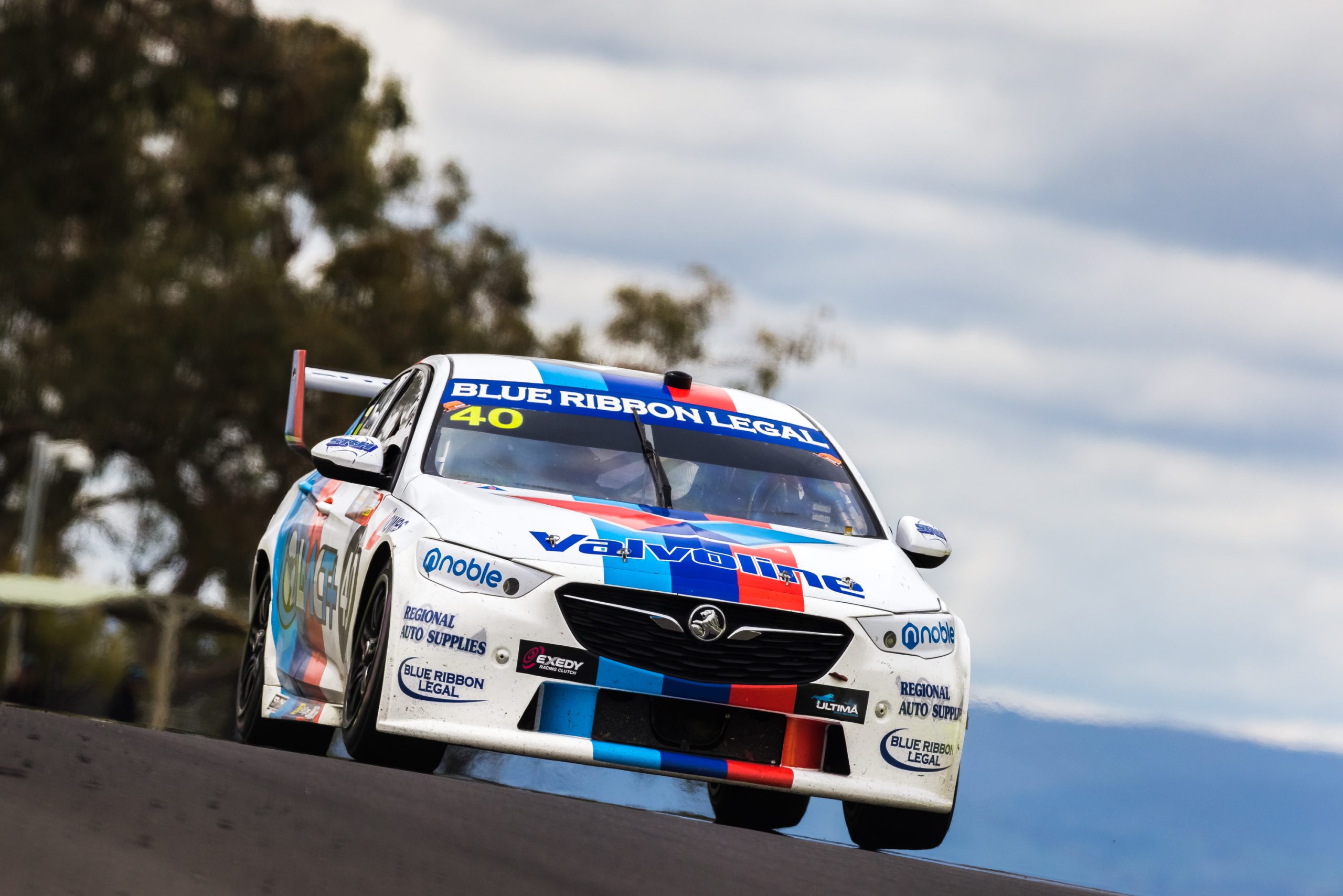 2020 certainly has been a very unusual year for all. There have been very few industries that have not been adversely affected by COVID-19 and it was Motor Racing that was front and centre at the beginning of this health and economic crisis in Melbourne at the Grand Prix in March.

I remember the day clearly. Friday the 13th March, travelling down St. Kilda Road to Albert Park on a tram and talking to a couple of Kiwi tourists. They asked me whether I thought the event would be cancelled and I said with great confidence “no”. Well, how wrong was I? Very!

At the beginning of 2020 I had no real intention of running a car at Bathurst, although the idea of a Wildcard entry was “loosely” in my thoughts.

Early September and Cheree Everingham (Tyler’s mum) rang Barry asking whether we would be interested in running Tyler in one of our Super2 cars at Bathurst. That idea did not interest me greatly, but the thought of a Wildcard entry in the 1000 again came to mind. The Wildcard idea interested me on a couple of fronts. First, was that Tyler being a talented, young (19-years old), up and coming driver and I remember his Mum’s excited screams in our garage at Symmons Plains in 2016 when Tyler debuted in Formula 4. I truly love the family side of Motorsport. Second, was the GRM staff. In such a difficult year the motivation and direction of many young Australians have been impacted adversely and I thought this would give them something to look forward to and particularly if it included nurturing young talent.

My want for the second driver was Nathan Herne an 18-year old Formula Ford Champion and Trans Am racer from Lismore.

It was now early September and we were in lockdown in Melbourne. Every Friday afternoon we had a ZOOM catch up with our staff which was a bit of fun, but also kept us in contact with each other and the camaraderie was wonderful. On Friday the 4th of September, we told the crew of our plans. Stiffy (Stefan Millard – GRM Team Manager) quickly put things in place including the relevant work permits so we could return to the workshop and begin preparing a car for Bathurst.

The car we chose to race was Bieber’s (James Golding) ZB Holden Commodore and it was untouched after finishing the final race at Newcastle in 2019. The car Richie (Stanaway) raced has been restored to the same spec that Garth Tander raced in 2018 throughout the Endurance part of the season, Sebring orange and a modern-day take of my very first Touring Car, the ex. Bob Jane A9-X Torana (1977).

The #34 car had been placed on our mezzanine floor amongst other retired GRM cars. On Monday the 7th we got the car down and preparations began. A two-day test was planned for Winton on the 22nd/23rdSeptember.

While the GRM crew stripped the car and serviced the components, I set about organising an upgrade of Nathan’s licence. Simply, to race a Supercar a driver must have 13 Superlicence points and if not, a dispensation can be applied for. I was aware that Nathan had 10 Superlicence points but did not see this as an issue, as this number of points along with Nathan’s impeccable racing history exceeded that of other drivers who have awarded this dispensation since the Superlicence inception in 2017.

Unfortunately, I was wrong. But more about that later.

The test at Winton went without a hitch and Tyler and Nathan were very impressive with the way they approached the two days. The conditions were mixed with times of light rain and a shared track with TCR cars, yet there was not one off-track occurrence. The crew sharpened up on their pit stops and the drivers led by Gypsy (Jeff Marshall) fine-tuned their pit lane skills. I would also like to acknowledge James Moffat who took two days away from building his new house (Moff The Builder!) to offer his experience to Tyler and Nathan. It is moments like these when I see experienced racer’s like Moff taking the time to help bring a new young crop through that I get an enormous amount of satisfaction and it motivates me to keep doing what we do at GRM.

Following the test, we returned to the workshop and the car was quickly set down and prepared for Bathurst as the crew had to head to quarantine the following week.

The upgrade to Nathan’s licence was certainly not going smoothly. We had obtained 17 references from respected Motor Racing competitors, officials and administrators but there existed a real reluctance to issue Nathan a licence. We had offered Motorsport Australia to attend the Winton test, but their answer was testing was not relevant. Well, let me tell you I have been doing this for 57 years and I can tell very, very quickly at a test whether a driver has what it takes. All my drivers starting with Steve Richards in 1996 were chosen following a test at Winton. In fact, I tested Garth at Winton the very same week that he debuted with GRM in 1998. To say testing isn’t a reliable indicator is just wrong.

I had been strong in my stance that if Nathan couldn’t race then we wouldn’t race. Barry and I had a good talk about this on Monday the 5th October as it appeared the appeal to MSAC (Motorsport Appeals Commission) regarding Nathan’s licence would not be heard until very late in the week. Although I was still very strong in my belief, I was also aware of the sacrifices that others had made for this Wildcard entry.

Cheree Everingham had done an enormous amount of work in bringing a sponsor group that supports Tyler together for the Wildcard entry and had made all the arrangements necessary for our team to be accommodated at Bathurst. The GRM crew had left Melbourne and were spending two weeks in quarantine. Valvoline, our loyal sponsor for more than 25-years also backed the entry and Tyler through all this uncertainty had maintained his composure and just about preparing the best he could.

Earlier in 2020, a young driver by the name of Jayden Ojeda came down from Sydney to meet with Barry and I. We were very impressed with his presentation and manner and his racing history and success in Formula Fords was also a positive. Jayden was considering racing an S5000, but later chose Super2 and having met Jayden I took notice of his performances at Adelaide and Sydney in the two Super2 rounds held this year.

We had a chat to Jayden and notified Supercars that if we were unsuccessful with Nathan’s licence appeal then Jayden would join Tyler in the Wildcard entry.

As the week rolled on there was an unusual silence from Supercars. In the lead up to a race meeting there are many clerical matters that require attention. Stiffy looks after all of this but was getting the silent treatment from Supercars. On Friday the 9th October this came to a head, we were less than a week out from Bathurst.

I was made aware that we were not on the entry list for Bathurst, although our Wildcard entry had previously been approved by the Supercars Commission. I contacted Sean Seamer and was told that unless we drop the case against Motorsport Australia over Nathan Herne’s licence then we are out.

Although extremely angry to be held to ransom when Nathan’s case was to be heard the following morning, I was given little choice.

The crew arrived at Bathurst late Tuesday and were thrilled to see the wonderful accommodation that Cheree had arranged. They are used to the dormitory style accommodation in the backblocks that I arrange. But this year they were on Conrod Straight (less than 5 metres from the track!) in a magnificent facility.

This year was the first year in the Supercar era that I had not attended a Bathurst 1000 and I think only the third one that I have missed since 1976. I heard Dicky (Johnson) was also at home, maybe next year the two us might get together and sit on the couch and have a beer!

I get an enormous amount of satisfaction watching young drivers develop. From Practice 1 it was very pleasing to see the manner that Tyler approached the weekend. He listened and acted on all the advice of the GRM crew and built up over the course of the weekend.

In Motor Racing it is generally the time clock that rules. Although Bathurst is run at a much more frenzied pace than the “good old days”, it still is an endurance race and if you can race the 161 laps without incident and complete efficient pit stops then you will achieve a very good result. The reality was were not going to qualify on the front couple of rows, so the instruction was to be at the back. At Bathurst if you are not up the front, the next best spot to be is at the back and keep pace with the train of cars ahead but watch the race unfold in front of you.

Tyler and Jayden were well and truly on the roads to such a result. Tyler started in the car and was very solid throughout his opening stint picking up several positions before handing over to Jayden on lap 22 who then completed a 29-lap stint without incident. Tyler then did a 25-lap stint from lap 51 to lap 76. At Bathurst the maximum stint on a tank of fuel is 23 laps, but this stint of 25-laps unfolded because of a Safety Car (SC) period. Following this SC there was a shower of rain and the conditions were challenging on a slick tyre. Again, Tyler handled the conditions extremely well. On lap 76 Jayden was back in the car and did a very good job to have the car inside the top 15 when he stopped on lap 97. Jayden stayed in and unfortunately on lap 103 he had a lose coming out of the chase and contacted the wall.

In most instances this would have been the end of the day with both LHF and LHR corners of the car heavily damaged. Stiffy rallied the troops and the crew got to fixing the car. To be deemed a finisher a car must complete 75% of race distance (121 laps). To the credit of the crew they got the job done with not a minute to spare. On lap 143 Tyler left the pit and made it to the finish. Although not the result that we aimed for I was very, very proud of the endeavour of all the crew, including the drivers to get the car back on track to complete enough laps to be deemed a finisher.

To Tyler and Jayden, I will continue to watch you both closely and with the right work ethic and attitude I am sure that you both will find that other opportunities present themselves to you. To Cheree and Katie Everingham thank you very much for trusting your son and brother with us and for the most hospitable way you cared for the GRM crew.