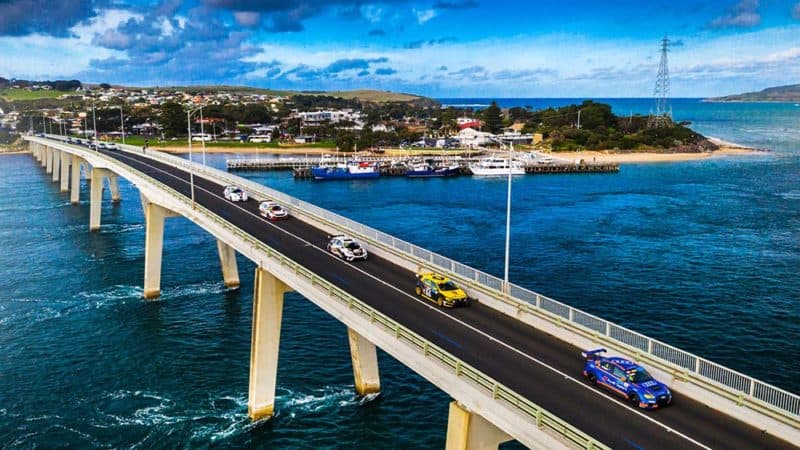 The carsales TCR Australia Series has arrived at Phillip Island in style, conducting a demonstration crossing over the San Remo Bridge.

Held under normal road rules, five of the new breed of Australian touring cars drove over the connecting bridge, believed to be the first major Australian motorsport category to conduct such a bridge crossing of its type.

Dubbed the ‘Gateway to Phillip Island,’ the San Remo bridge is the only way vehicles can drive from the mainland to the Island – home of the 4.4km grand prix circuit that the TCR Australia cars will compete at this weekend.

The carsales TCR Australia Series is the headlining act on the Shannons Nationals bill this weekend that will see qualifying and Race 1 held on Saturday ahead of Races 2 and 3 on Sunday.

“That was a pretty cool experience,” said Tony D’Alberto.

“I couldn’t tell you how many times I’ve driven over that bridge. I first came to a race meeting at Phillip Island long before I was a race driver. My first trip, I would have still been in a baby seat!

“To have the opportunity to drive my Honda TCR car across the San Remo bridge was great. I can’t think of a better way to bring this new class of touring cars to Phillip Island.

“The Phillip Island circuit is one of the best race tracks in the world. We are so lucky to have it here in our own backyard. And these TCR cars are going to be a hoot to drive around here. It’s a fast track, and being turbo-charged front-wheel drive, our cars are going to be pretty wild to watch.”

““I’ve been to Phillip Island many times, but today was the first time i’ve ever driven a race car over the bridge from San Remo to the island itself,” said Chris Pither.

“It was a unique experience, it was good to see so many people out and supporting the second round of TCR Australia at Phillip Island this weekend.

“Cruising along the bridge at 60km/hr feels relatively slow in a full-blown race car, it was something I thought i’d never get the chance to do and it was so cool to have that opportunity today.

“I’m looking forward to getting back into the Ice Break Renault Megane RS TCR car this weekend, we had a few issues which hampered our performance at the first round, but we’re confident that we can build on what we learnt and come out firing here at Phillip Island.”